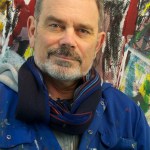 Peter Symons studied at the Slade School of Art and has been a practicing artist since graduating in 1980.  In 2011 he successfully completed a MA in fine Art at Wimbledon College of Art UAL.
Living in Bournemouth since 1989 with Mel and their two children Rachel and Ricci.

Peter is a Senior Lecturer for BA Animation Production at the Arts University Bournemouth and works from his studio in Southbourne.

He exhibits regionally and nationally. His work, inspired by buildings ,seascapes and the countryside, evocatively uses colour , light and shadow to produce introspective explorations of natural forms. His practice is painting, drawing and experimental stop motion film making.